Fifty shades of grey in higher and distance education (#oped12)

Posted on September 17, 2012 by opendistanceteachingandlearning

Not a day goes past without someone, somewhere claiming a new form of higher and distance education whether it is a new type of Massive Open Online Course (MOOC), a Little Open Online Course (LOOC) or various degrees of for-profit or free, accredited or non-accredited, open or closed, fully asynchronous or blended, etc. The notion of ‘open education’ seems to have gone viral with various permutations and shades reminding me of a recent book by James (2011) – “Fifty shades of grey.”

Considering that the book contains scenes featuring sexual practices such as bondage/discipline, dominance/submission, and sadism/masochism – I withstood the temptation to reflect on the notions of bondage/discipline, dominance/submission and sadism/masochism as lenses through which to view managerialist discourses in higher and distance education. Maybe another time? Presumably, the title of the book comes from a song “Night falls like a grand piano” – but I use the title to point to and reflect on the current flux in the state of higher and distance education.

The title of (and the picture used in) the blog also have another basis, namely the article by Raymond (2005) titled “The cathedral and the bazaar” in which he reflects on the history of Linux in the broader context of traditional software development. In stark contrast to the development of Linux as open software, traditional software development “needed to be built like cathedrals, carefully crafted by individual wizards or small bands of mages working in splendid isolation, with no beta released before its time” (para.3).  Contrary to this development style, the development of Linux resembled “a great babbling bazaar of different agendas and approaches… out of which a coherent and stable system could seemingly emerge only by a success of miracles” (para.4). The combination of these two unlikely sources resulted in me adapting a painting by Brueghel (1559), “The battle of 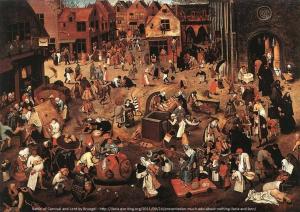 carnival and Lent” in a palette of different tones of grey. In the painting by Brueghel, the tensions, transitions and seemingly folly of abstinence and piety in a time of abundance are portrayed. Another parallel with the flux in higher education? [The original painting by Brueghel is rich in colour – see the picture on the right]

A long time ago (when bondage used to mean something else…), higher education institutions were cathedrals where the liturgy and sacraments of knowledge and eternal employment were served to those permitted into the sanctuaries, strictly monitored by canons and councils with different hierarchies of admission requirements and access to knowledge was protected, often at all cost. The discourses and epistemologies in these cathedrals were coded and the algorithms for these codes were not shared. Distance education changed some of these traditions by opening up the doors of the cathedral to those who would never have been allowed to enter. Needless to say that cathedrals frowned (and are to some extent still frowning) on distance education as somehow of lesser quality.

On the other end of the scale are recent developments in higher education as bazaar – full of noise, different stalls with vendors trying to outdo one another by offering a range of products and experiences ranging from massive open online courses or MOOCs (with all the different variants and hybrids), Little Open Only Courses (LOOCs, of anti-MOOCs), Udacity ( “a totally new kind of learning experience”), EdX (“The Future of Online Education For anyone, anywhere, anytime”), Coursera (“Take the World’s Best Courses, Online, For Free”), Khan Academy (“Learn almost anything for free”), Pearson higher education (“Always learning”) and a range of hybrids, blends, mutations and shades of grey. In this bazaar there are some stalls with agreements with cathedrals while other stalls are in competition with the cathedrals, opening up the sacrament of knowledge to those ‘on the outside.’ There are also, curiously, some cathedrals, with banners waving and choirs singing, joining the fray of the bazaar.

[On a side note: Making matters even more interesting, is the fact that many of the bazaars are hosted on the premises of the cathedrals (but never, o never on the inside…). Access to the sacrament of accreditation by these cathedrals is still for those carefully selected, hand-picked individuals – which may not be a bad thing – we don’t want to barbarians inside, do we?]

It is therefore interesting to listen to the noise of the bazaar as we try to define, claim and defend different definitions of distance learning, online and e-learning, distributed-, flexible and open learning, open distance learning (ODL), open distance and e-learning (ODeL), MOOCs, LOOCs, flipped classrooms and Bring-Your-Own-Device-Learning (BYOD) to mention but a few terms. It is as if the each stall tries to outdo the next stall in the marketplace by claiming uniqueness. Higher education theorists (those who have not given up on making sense of the cabal) are either paralyzed by the flux (the moment they define a term it changes into something else), or raise the alarm by defending the different definitions by meticulously listing the ‘true’ characteristics of each of these in-flux forms.

Let us now return to Raymond’s (2005) article “The cathedral and the bazaar” in which he highlights a number of issues we may want to reflect upon. He writes:

In closing: I realise there is a vast difference between the world of programming and the complex, messy and noisy world of higher and distance education as bazaar. Despite these differences, I think the current bazaar-like state of higher and distance education prompts us to rethink many of our assumptions, definitions and traditional defences of higher education as cathedral. The noise from the bazaar heralds in a new age of flux and fifty shades of grey…

Research professor in Open Distance and E-Learning (ODeL) at the University of South Africa (Unisa). Interested in teaching and learning in networked and open distance and e-learning environments. I blog in my personal capacity and the views expressed in the blog does not reflect or represent the views of my employer, the University of South Africa (Unisa).
View all posts by opendistanceteachingandlearning →
This entry was posted in Oped12 and tagged accreditation, distance education, e-learning, education, higher education, LOOC, mobile learning, MOOC, online courseware, open distance learning, Udacity. Bookmark the permalink.