Send in the clowns – managers and leaders in higher education (#CFHE)

Posted on November 12, 2012 by opendistanceteachingandlearning

We can possibly describe 2012 in higher education as alternating between revolution and carnival as higher education institutions across the world respond to the stampede to roll out online learning, embrace various forms of open courseware, teaching and accreditation, different forms of massive online open education (MOOC), and adapt to changing funding regimes. The present revolution/carnival reminds me of medieval carnivals where clowns or court jesters commented on, critiqued and questioned the official discourses and accepted norms and practices of the Court/Church. “As opposed to the official feast, one might say that carnival celebrated temporary liberation from the prevailing truth and from the established order; it marked the suspension of all hierarchal rank, privileges, norms, and prohibitions. Carnival was the true feast of time, the feast of becoming, change, renewal. It was hostile to all that was immortalised and completed” (Bakhtin 1984:10). During these carnivals, official truths and canons were questioned, ridiculed, and “the conventional norms and protocols [were] suspended, as the common life [was] invaded by a great wave of riotous antinomianism which [made] everywhere for bizarre mésalliances” (Scott 1986:6). There was a fine line between carnival and revolution…

Within the context of this carnavalesque period where traditional assumptions, epistemologies and distinctions between different forms of higher education are redefined and questioned, what do we expect of our leaders and managers? This blog is not about providing (yet another) attempt to distinguish between managers and leaders in higher education.  Personally, I find these (often elaborate) distinctions and classification systems superficial and laborious reading.  In most of these explorations of the distinctions between managers and leaders, managers are often denigrated to the role of foot soldiers who act on the orders from higher up (sometimes literally).  Spare a moment for these unlucky souls who, with no mind and creativity of their own, are destined to jump at being called to the office of Brother or Sister Leader who had an epiphany during the night, or worse still, whose speech writer had an epiphany during the night.

This blog is not about leaders or managers, however appreciated, or cursed. I would like to reflect on the impact of decisions leaders and managers take, often after sleepless nights, or in a split second. How do we judge and evaluate them retrospectively when the results of their decisions are glaringly visible for all to see – whether good or bad? What does it take for those in leadership positions to take a decision, affecting the lives of many, while they do not, necessarily, have all the facts to their disposal, or possibly decide to ignore some obvious facts? Understanding higher education as entering a period of supercomplexity (Barnett, 2000), how do higher education leadership make decisions?

Higher education leadership also has to dance to tunes played by national legislation and funding frameworks, the demands of regulatory and professional employer organizations, the drum beat of neoliberal market ideologies, an increasingly disgruntled faculty, administrative departments and students-as-customers. How does the leadership then decide to join the rush to join Coursera, MOOCs or go fully online? What evidence does leadership use to make these decisions? And how do (or don’t) they embrace dramatic systemic shifts required by an increasingly globalized, open and digital world?

Leadership’s understanding (or misunderstanding) of a particular context (whether current or future) shapes their responses. For example, should they understand a particular situation as ‘simple’, they will be keen to follow ‘best practice guidelines’ imported from a different context to (quickly) solve a problem. Another example would be for the leadership of an institution to appoint a committee to investigate a situation and submit a report in a context that is highly turbulent, where there are no clear cause-and-effect relationships and where there are no right answers.

Personally I still find the Cynefin framework by Snowden and Boone (2007) a useful tool for understanding the need for different types of responses in different contexts.  Snowden and Boone (2007) distinguish between four different contexts – ranging from simple, complicated, complex to chaotic.  In each of these contexts, there are different relationships between cause and effect, and therefore, our responses (whether sensing, analysing, categorizing, responding) take different forms.  The below figure illustrates their framework: 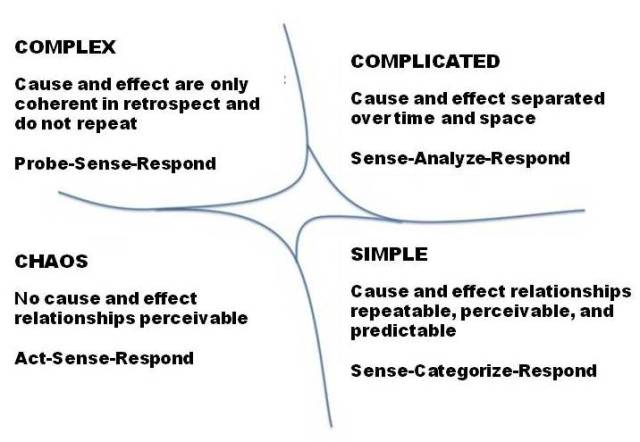 Without discussing their framework in detail, I would like to point out to Snowden and Boone’s (2007, p. 3) description of complexity:

In the past higher education was fairly predictable with strict and very visible distinctions between Ivy League, other residential (face-to-face) and distance education universities. With the increasing convergence of different types of higher education and new types of higher education emerging, it is simply no longer business as usual.  The number of variables and nonlinear interactions has increased exponentially with minor interventions or actions resulting in disproportionately large consequences. We (and the external consultants and oracles we get to advise us) also forget that each institution and the higher education sector as a whole, has a past, and we cannot separate the past from the present (or the future). It is crucial that we understand evolution as irreversible. Our institutions are furthermore constrained by our contexts and by the different agents in these contexts. “This means that we cannot forecast or predict what will happen” (Snowden & Boone, 2007, p. 3).

This year has provided ample evidence that higher education has moved away from simple and even complicated contexts, and function, increasingly, in complex and chaotic environments often bordering on disorder (as described by Snowden and Boone, 2007). I don’t like binaries, but I suspect institutional leadership can either respond to the current and projected future flux with arrogance or by being paralyzed with indecision. I don’t know which is worse? Arrogance and paralysis may also be two gestalts of an incompetence to deal with the new permanence of ambiguity and flux.  Leaders may then either ask, arrogantly, “what revolution?” or have a wild West approach shooting at shadows, clamping down on the carnival and incarcerating  the clowns.

We need, more than ever before, the clowns – those who question, challenge, provoke, and dethrone management and leadership in mock rituals. More than ever before do we need rigorous and informed debates regarding the future of higher education in an increasingly unequal world.

Send in the clowns.

Scott, N.A. (1986). The house of intellect in an age of carnival: some hermeneutical reflections. Journal of the American Academy of Religion 55(1), 3-19.

Research professor in Open Distance and E-Learning (ODeL) at the University of South Africa (Unisa). Interested in teaching and learning in networked and open distance and e-learning environments. I blog in my personal capacity and the views expressed in the blog does not reflect or represent the views of my employer, the University of South Africa (Unisa).
View all posts by opendistanceteachingandlearning →
This entry was posted in #CFHE12 and tagged Cynefin, distance education, e-learning, higher education, MOOC, open distance learning. Bookmark the permalink.